One of our goals for Decked Builder is to help you find and build better decks, but we felt that we have been lacking in this area. We have been working to change this, and are proud to announce the beta of mtgo-stats, a site that we have been building to accumulate statistics and decks on MTGO games.

At the heart of the site is a deck classification engine that we have been working on, which allows us to automatically classify decks into major archetypes with no human intervention (imagine having to manually classify the hundreds of MTGO daily winning decks). This in turns allows us to present some really interesting statistics to help you better analyze and understand the MTG metagame on a daily basis.

For example, Blue Aggro decks make up about 31% of the field, followed by White Aggro for another 17%. Geist of Saint Traft appears in Blue Aggro decks about 90% of the time with an average of 2.49 copies of them in the main deck, and so does Timely Reinforcements (but in the sideboard).

Need some deck building ideas? Just head over to our site to check out the popular deck archetypes and download a deck to play around with. Just point your browser to (our current beta site):

What the site provides:

We are still working to tweaking the classification engine, but are looking forward to your feedback, comments and suggestions! 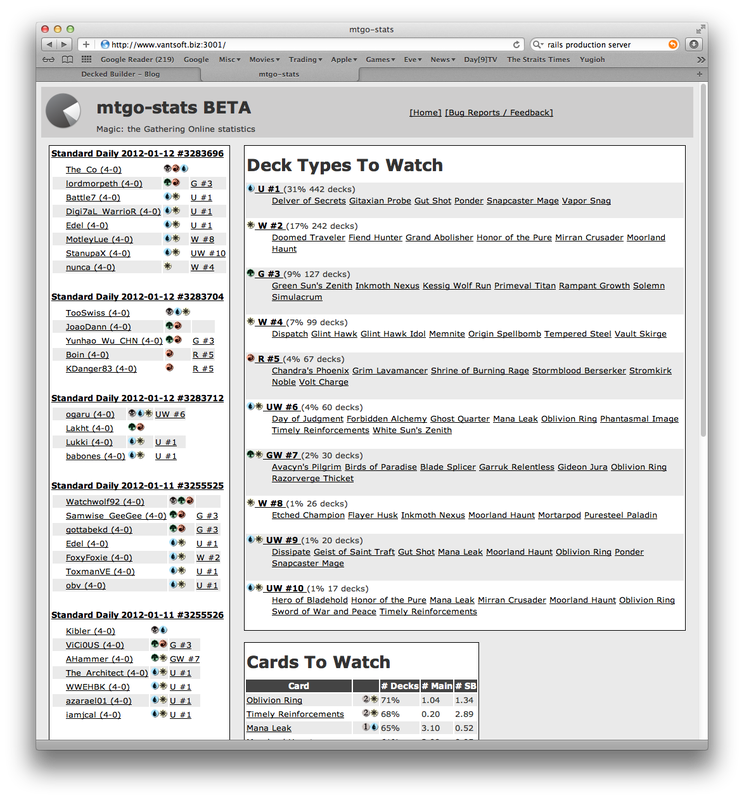