Avacyn Restored is nearly available for Decked Drafter. We have received the write-ups and ratings from Marlon Egolf and Timothy Landale, and are doing the final editorial rounds now. We are also waiting for Apple to approve the in-app purchase as well (yes, even in-app purchases need to be approved!).

Here are two sample card write-ups below, one from Marlon and the other from Tim.

Borderland Ranger
Rating: 74
Timothy Landale’s notes: Almost all cards that replace themselves are playable in limited. Searching for a basic land lets you fix your mana, and you get a 2/2 creature out of the deal. This card should be taken early and often. Taking them early will also allow you to splash much easier later on. 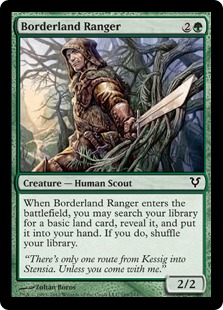 Driver of the Dead
Rating: 56
Marlon Egolf’s notes: Driver is a solid, if unspectacular way to get a bit of mid-game value. Three power for four mana is fine, and he shouldn’t have a problem trading in combat. Once that happens, you get one of your smaller guys back, assuming you were able to trade one off beforehand. If you are very low on two drops then Driver loses a lot of his appeal, but otherwise he should be fine.